The Sign It Quick experts can advise you on the readability of your signage.

How large should the letters be? What color can be read easiest against what background? What angle does your sign need to be read from? What about the height of your sign? So you decide who needs to read your sign, and work with our expert team to make those decisions together.

Creating a sign is only part of the process. Your signs need to be read easily and that involves decisions like letter size, spacing, background color and lettering and graphic color. Did you know that the background color can often make the biggest impact in readability? Also, placement of your sign can be critical to whether or not your sign is easy to read. These are all important reasons why you are going to enjoy and appreciate working with the Sign it Quick team in making all these vital determinations. 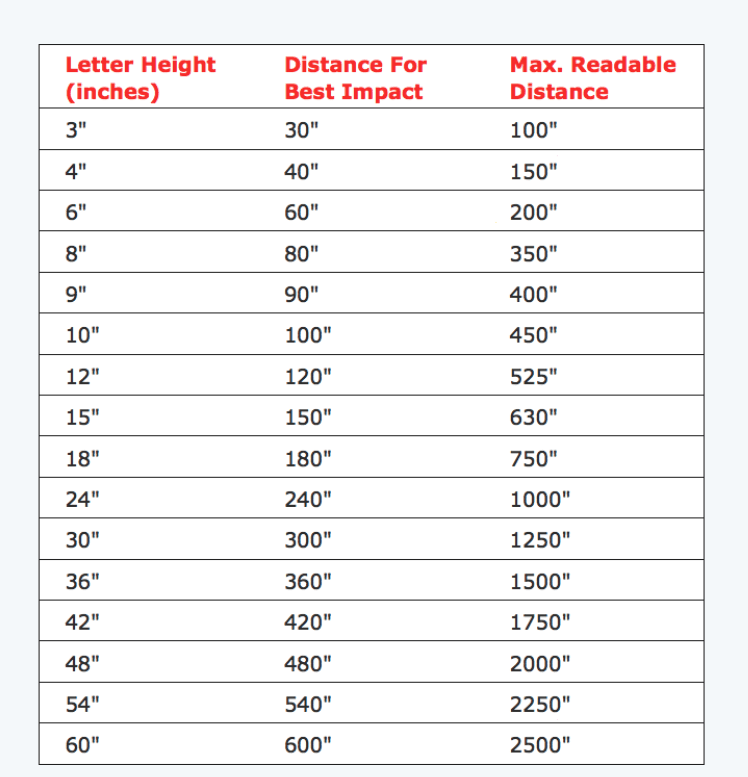 I need to get custom signs printed. How do I know the sign I'm designing will be effective?

There are four main elements of effective design to keep in mind when creating custom signs and banners: visibility, readability, “eye-catchability” and legibility. See below for detailed information regarding each of these important elements.

Your sign’s size will determine the height of the lettering you should use. We recommend one inch of letter height per 10 feet of viewing distance.

Less is usually better. Your Sign It Quick Custom Signs Expert will help create maximum readability for your custom signs and banners. Larger, bolder letters and additional colors can add emphasis, as can attractive graphics.

The color you use in your sign should contrast well with the environment in which it will be placed. Use of eye-catching graphics is important to your sign’s overall impact, also

Letter style is crucial to legibility. Avoid using fancy script lettering – especially when signs or banners must be read from a distance.

What background and lettering colors should I use for my banners? I want people to be able to see them from a distance, but I don’t want to make their eyes go buggy. Do you have any suggestions?

A high color-contrast factor will make your banners easier to read. Listed below are the best sign background and lettering combinations, ranked in order of legibility from a distance.

I want to use a colored background for several custom signs I need to get printed. What color choices would be best for overall effect and readability?

The background of your custom signs will have a greater impact than you might imagine. Using a yellow background with black lettering yields the greatest contrast and overall signage readability. A dark-colored sign (such as blue) with light-colored or white lettering gives high visibility. Backgrounds and lettering with similar color intensities are not necessarily good choices, as they lack adequate contrast. Similarly, a too-bright background with colored lettering gives an illusion of motion or vibration – which could make your readers’ eyes go “buggy.” See the various color combinations below and decide for yourself.

Help! I need to print up banners and signs for a sale at my small business. The signs being placed outside the buildings should be big enough to be read at a short distance – say, about 30 feet; and the lettering on the banners needs to be big enough to read from about 200 feet away. But I don’t know how big the lettering on my banners should be. What do you recommend?

Well, you’ve certainly come to the right place. Sign It Quick can help you design the custom signs and banners you need for your orientation weekend – or any event – and we can print them for you in no time!

Here’s a quick tip to figure out how big your lettering can be. Determine how wide your signs (and banners) will be (measuring from left to right). Count up the number of letters and spaces on each line of wording, beings sure to leave one space at the beginning and end of the line. Divide the length of the sign by the total number of letters and spaces to determine how large the letters can be. So, say your sign is 42 inches across and it needs to read “Registration” on one line, with an arrow beneath it pointing to the registration building. Allowing for a space on either side of the word, that gives you 14 characters; divide 42 by 14 and you realize you can use three-inch lettering, depending on the letter style.

As for signage readability, the chart below lists various letter heights, along with distance for optimal reading, as well as maximum readability distance.

I love the way script writing looks… but I’m concerned that people might not be able to read my sign from a distance. What style lettering is best for my sign?

You should go with a lettering style that works visually, yet still affords prime readability. Just because you happen to like the way a particular script style looks, if people can’t read what your sign says, it doesn’t much matter what it looks like, does it? For instance, you wouldn’t use an all-uppercase script lettering for eight-inch-tall words that need to be read from the other end of a football field. Chances are, you’d be better off using Times New Roman, Baskerville or some other serif font that reads easily from a distance.

Take a look at the various font styles below before deciding on the lettering for your sign.

Script fonts project an elegant image. Unfortunately they are often characterized by poor legibility. They should only be used for short viewing distances and only in combinations of upper and lower case letters.
Display:

I constantly need to get signs printed up for my business. Some of them are pretty intricate; others are kind of plain. When should I look into digital printing for my custom signs?

Whenever your signs feature a lot of detail, shadowing or more than four colors, you should consider digital printing.

With all the rain and pollen, the magnetic signs on my vehicle are filthy! What should I do to care for them?

How should I clean and store my banners?

Always clean your banners with mild soap and water. To store, roll them with the lettering on the outside. It’s important to remember you should NEVER fold banners – always roll them!

Creating a Sign is Only Part of the Process

Locations to Serve You 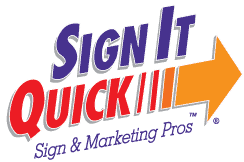 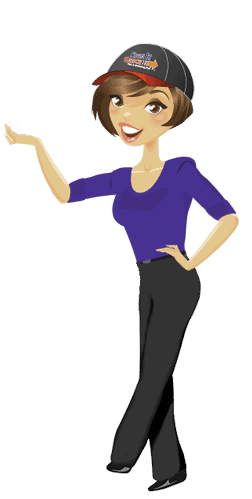